There are pivotal events in the life of every artist. This exhibition was certainly one for me and, I suspect, for everyone else involved. In 2003 I began to associate with a small group of artists based at the Rudston Art Centre. Part of a complex that included the Bosville Arms pub, this purpose built art centre was owned by professional artist Tony Hogan. Situated in the heart of the glorious Yorkshire Wolds it was an ideal place for a budding artist to practise and learn his craft and I spent many an idyllic day there. One evening after a convivial wine and dine at the Bosville (we had a lot of those!) it was decided that the group would visit Venice. Venice of course is one of the most beautiful cities in the world and has  been a source of inspiration  for artists throughout the ages. Although invited, it was impossible for Merice and I to go...we just couldn't afford it. But don't feel too sorry for us - I was quite happy to stay at home and man the gallery with all its facilities at my disposal while the rest of them were away!

Anyway back they came full of excitement, ideas and inspiration. It seemed a logical step to translate all their experiences, sketches, paintings and photographs into an exhibition. Tony graciously invited me to participate and Margaret Hockney kindly gave me permission to use her photographs as source materiel for my contribution. It was very exciting, certainly for me. It was the first real exhibition I had been involved with and I felt like a 'proper' artist for the first time as we planned and prepared for the event. 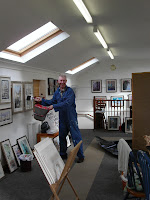 First we had to get the gallery looking its best. Somebody decided that it would be a good idea to paint the panels 'Pugin' red - I think it was Liz, but can't be sure. What I can remember clearly is just how difficult it was to paint the darned panels! But we persevered and eventually it was 'ship shape and Bristol fashion'. The next new thing was being interviewed by the press. We had managed ('we' should probably be translated - Tony) to get lots of publicity for the show. It was very novel for me to be interviewed and photographed by the boys from the papers. We were there as a group but I do recall that when the colour article came out - they had concentrated more on Liz than anyone else.
Would you like to see my paintings now? Ready or not - here they are:


These were all based on photographs that Margaret took and what about those titles then. I asked an Italian friend of mine to supply translations so "Misty Morning" became "Mattinata Mistosa" which sounds a lot more romantic does it not. Even "Niente Azzurro" makes you think of gondoliers and.... well admit it cornettos... but it definitely sounds better than "No Blue Used"!  I have to admit that some have stood the test of time better than others. Then came the hanging. This is the only time ever that I can say I enjoyed the hanging as later it became just a necessary chore. But getting everything just right was part of the experience and though painstaking and time consuming it had to be done.

But it wasn't all hard work - we did have some light relief:

Then came the night itself....the preview. There were people milling about to be chatted to, wine glasses to be filled up, even some last minute framing to be done!


The opening  night was a great success - we all sold something. I was in the back framing a print when Eileen came in and said someone wanted to buy two of my paintings. When I went to see him, he commented how much he liked them and how I had managed to capture the light and atmosphere of the City. "Of course" he added, "you have to go there yourself to be able to do that." What could I say....I agreed wholeheartedly of course! Over the next few months I sold another three of my paintings - one because it was the right shade of blue to go with someone's new bedroom wallpaper!
All in all it was a fantastic experience and left a lasting legacy. It cemented the bonds of friendship between the group that exists to this day and we have exhibited together many times since. It certainly contributed to Liz's decision to open her own gallery which she did later that year. Gallery Forty Nine thrives to this day and is a major attraction for visitors to the East Riding. On a more personal level, it inspired Merice Ewart Marshall to become an artist in her own right. Although part of the organising, setting up and publicising of the event, Merice felt she was missing out by not having anything to exhibit herself - something she happily rectified. This has meant that we have been able to work and exhibit together.
Venice Exhibition, Rudston Art Gallery 2005. Contributing artists: Tony Hogan, Eileen Hogan, Margaret Hockney, Ken Wathey, Rob Gobel, Liz Barton, Glenn Marshall. Official Photographer: Merice Ewart Marshall.
Posted by Unknown at 08:51