"To say to the painter that Nature is to be taken as she is, is to say to the player that he may sit on the piano."
James Edward McNeil Whistler

Not all my paintings are inspired by nature...sometimes I am intrigued by a particular effect or look that I want to try and capture. Having decided on the 'look' I want, the next stage is to find a real place that will best fit that look. I had been looking at a painting of Scarborough by J.M.W. Turner. He visited Yorkshire several times and did lots of paintings of the area including Scarborough but I can't find any record of a visit to Bridlington. So that got me thinking, "What if he had made it to Bridlington after all?". So that's the genesis of my painting. Now let me say straightaway that it was never my intention to do a 'Turner' - how could I or anyone else do  justice to this country's greatest ever artist. His shifting shapes and dissolving forms were happening in his head not mine but I could use some of the ideas and techniques that we know he used to help me achieve what was in my head!
So to work. My initial pencil sketch is fairly accurate of the view from Sewerby steps towards the town. Although obviously very simplified the proportions are just about correct so this is the first change to make. So I did what Turner often did and exaggerated the height of the cliffs to make the scene more dramatic. Of course in Turner's time this was never an issue. When he got back home to London and said this is what the cliffs look like - very few people would be able to argue - no digital cameras back then! But this idea is also in line with what Whistler said in the above quote. By his time photography was starting to become popular so he realised that as a painter, he was going to have to do things differently to be able to compete with this new technology......this is even more imperative these days.
So here's the first painting from the sketch: 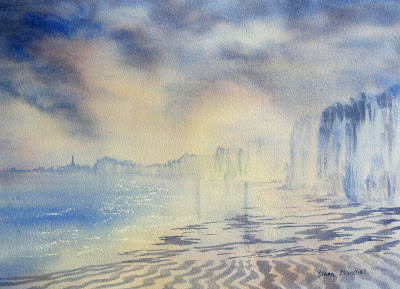 You can see that the cliffs have been made higher. I also used a lot of yellow on my first wash and established a very clear light source as the great man often did. I faded the background but retained the church steeple as this is a very prominent Bridlington landmark. The foreground is quite bold and distinctive which again is a Turner trait. I was pleased with the result. Now a dear friend of mine who has been involved in the art world her whole life once told me, "If you  achieve an effect once, it might just be a lucky accident, but if you can do it again and again, then you have learned a new technique.". Sound advice, so I decided to do the painting again. This time I should be able to take more care with the detail as I had already worked out the technique. It worked and I was really pleased with the result. Would you like to see it? All will be revealed later. I left it for a couple of days and just kept having a look at different times - it just needed something extra to finish it off. 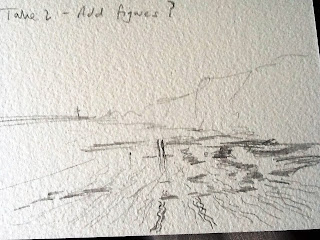 Figures? Possibly. Turner certainly used figures as they give a sense of scale as well as a focus for the viewer. But I decided to wait another day or so before I made up my mind. I mentioned my musings on Facebook and got a variety of suggestions ranging from a 'moose' (A friend of mine from the USA),a dolphin, fat bloke with burger and onions. knitting whale (my wife - ever helpful!), dancing hippo in a tutu (what can I say Ozzy?) to a boat....all very helpful I'm sure. Anyway you have waited long enough so here is the finished version:
I exaggerated the cliffs even more and painted the foreground carefully before adding the figures to complete this timeless scene - hope you like it.